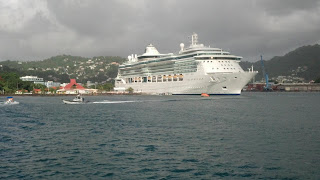 Although we have been on over 30 cruises, we have never made it to the southern Caribbean… until last week.  There were nine of us traveling, ranging in age from 14 years old to 78 years old…Royal Caribbean's Jewel of the Seas made sure we all had a great time.

Our first stop was in St. Croix.  There is such a mixture of people there.  The island is basically divided into three sections; east, midland, and west.  We docked in the west section.  “Franklin’s on the Waterfront” is one beautiful store not to be missed.  The owners are American and moved to the island five years ago to live out their dream on a Caribbean island.  “Polly’s” café served everything from beer for breakfast to local fare.  Definitely worth a stroll into their air-conditioned restaurant to just have a cool drink and a snack.  Further inland, we came across Holy Cross church, which is a Catholic church, and is beautiful.  The craftsmanship inside the church is absolutely breathtaking.  The locals are very friendly, although the taxi drivers could be a bit pushy at times. 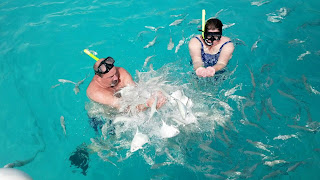 Our next stop was St. Maarten.  We docked on the Dutch side and there is no shortage of jewelry shops here!  The people were not aggressive or pushy at all!  This was a laid back island!  We shopped the Dutch side and hopped a taxi ride for $25 to the French side.  Although the island is divided, the people are not.  The French shops were much more upscale, as if you were shopping in Monaco on the Med!  The afternoon found us chartering a private catamaran for 4 hours.  Mirabella Catamaran Company took care of us first class! Open bar and lunch and snorkeling?!  Who could ask for a more relaxing time?

St. Lucia was another favorite stop.  We opted for a 45 minute boat ride to Soufriere (Smell of Sulfur is how it is translated – but don’t be frightened, it was a beautiful seaside town!  We got off the boat and had a 10 minute bus ride to the mud baths – so worth it!  Then another 10 minute bus ride (air-conditioned!) to the waterfalls.  The falls were a bit crowded, but who wouldn’t want to stand under the falls and be showered by nature?  We then got back on the boat and headed back to our cruise ship, but not before stopping at a beachside restaurant.  The “water taxis” a.k.a. men in kayaks took those ashore who did not want to get in the water.  The 45 minute boat ride back to the dock was memorable as we indulged in free rum punch! 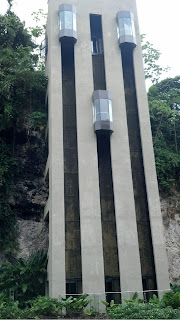 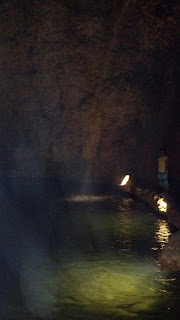 Antigua was not a favorite stop for us.  There were loads of shops, but the taxi drivers were all over and were determined to book a tour!  We did not tour the island, just did a lot of shopping, and there is plenty of shopping to be done!

Our last stop was Barbados.  We have never been to a more friendly island!  These people were amazing.  Our taxi driver, Michael, took us to “Harrison Caves”.  Once there, it was a 45 minute tram ride into natural caves, 170 feet underground!  We then toured the island and ended up at a small seaside restaurant where we feasted on “flying fish”, a local favorite.  The island is home to Rihanna and many celebrities have visited, opting to stay at some very upscale hotels.  This island was a favorite!

Our group of nine had such an amazing southern Caribbean cruise, we can’t wait to go back!  Everyone from the 14 year old to the 78 year old felt this cruise was top notch! 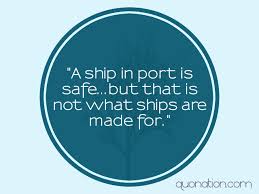 Early in February 2013, the Carnival Triumph caught fire. After undergoing extensive enhancements and upgrades she re-entered service, on June 13, resuming her year-round schedule of four and five day cruises to Mexico out of Galveston.

“Carnival Triumph is returning to service looking like a new ship, with a variety of technical, food and beverage and entertainment upgrades,” says CEO Gerry Cahill. “This is a proud day for Carnival and the culmination of a huge effort by our employees.”

While in dry dock, Triumph received many of the Fun Ship 2.0 amenities. 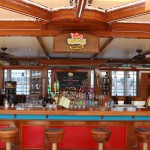 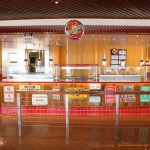 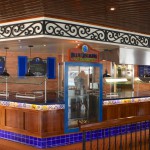 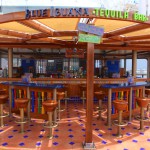 Would you cruise on the Carnival Triumph?

www.lifesrudder.com
@lifesrudder
Facebook
Posted by Janelle at 2:38 PM No comments:

Gotta Take It With Me

Everyone has their favorite things they "have" to travel with to make their journey easier. For some it is a plastic bag, or duct tape, or clothes pins, or pill boxes, etc. Following are 5 things that make my travels more comfortable. 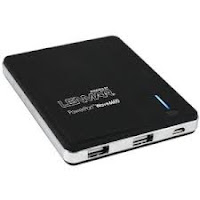 See what others have to say about the Lenmar power charger. http://www.amazon.com/Lenmar-PPW66-PowerPort-Wave-6600/dp/B005DTJI7Y 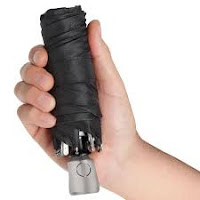 2) Umbrella: Come rain or shine a mini umbrella always has me covered. 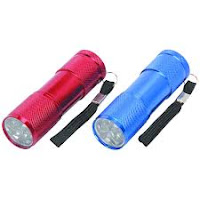 3) Flashlight: My small, lightweight, glow-in-the-dark flashlight always accompanies me. I've used it in my staterooms to get up in the middle of the night. I've also used it to investigate an unexpected noise. Should the electricity go out whether I'm on land or sea, I'll be able to see.

4) Walking shoes: I wear closed-toe flats when I am flying. In my recent travels, I've worn my running shoes on travel days. This way the bulky shoes do not take up extra space in my suitcase, and I'm quite comfortable while moving through terminals and different places.

5) Sweater or lightweight jacket: I never know what the temperature might be on a plane, in a conference room, in a theatre or a restaurant/dining room.  By dressing in layers and having a small jacket or sweater, I can be comfortable no matter how the temperature rises or falls.

What is something that you "have" to take with you when you travel?