Diary of a Traveler on the American Queen--Day 5

Diary of a Traveler on the American Queen---Day 5 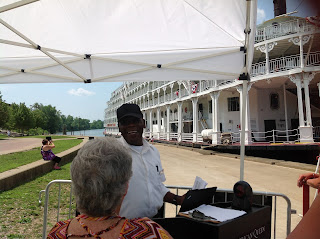 Beautiful people! That's who I saw and meet during my voyage on the American Queen. Beautiful smiles! Beautiful personalities! Beautiful attitudes! To only name the few people that I came in contact with would be like only mentioning the pitcher of a championship baseball team. It takes a great team to achieve greatness! Everyone from the Purser's Desk, to the boutique personnel, to the dinning room staff, to the bar tenders, to the entertainers, to the people behind the scenes...everyone pitched in to do their part to make sure passengers had a memorable experience. 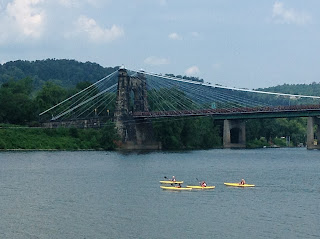 Wheeling, West Virginia was our port today. The City of Wheeling arranged shuttle service to the Wheeling Island Casino. There were also hop on-hop off stops at several local establishments and museums. After several days of touring the cities on the bus, I finally figured the best way to utilize the tours. Every city had a tour guide that would come onto the American Queen buses. My first time on the bus, instead of getting off at the first stop, I stayed on until the bus made the loop around the city. This allowed me to hear the tour guide's complete story. The second time around on the bus, I hopped on and off at the various stops.


One of the most beautiful sights to me in Wheeling was the suspension bridge, built in 1847. The bridge spans over 1,000 feet and is the oldest vehicular suspension bridge in the United States. 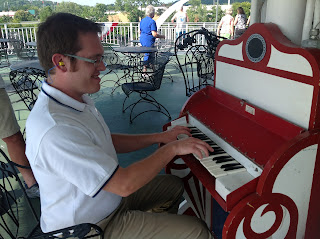 One of the experiences I enjoyed on the boat was the classic sound of the calliope. A calliope is a musical instrument that produces sounds by sending steam through whistles. 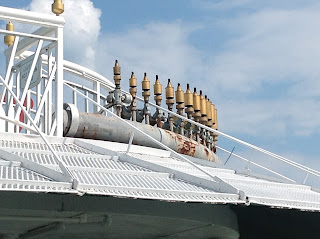 As the American Queen departed, Jason Bell, (graduate of the University of Memphis in Piano Performance and pianist with the steamboat Synchopators) played the calliope. As Jason played, the sounds of the calliope reached the shore and filled the hearts of the town folk with pride. How do I know this? Because people literally stopped what they were doing in order to catch of glimpse of this beauty. 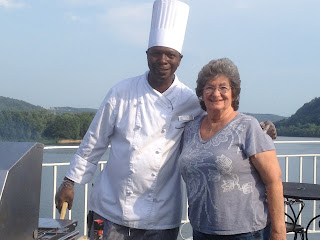 I had two food highlights today. The first was a steak cooked to order by Chef Unza, on a grill, at the River Grill (an open-air type venue). I'm keeping an eye on Chef Unza. I believe one day he's going to be on the Food Network Channel. This steak was cooked to perfection and then, I had the enjoyment of eating it, while I cruised up the Ohio River. And yes, the scene was accompanied by a gentle breeze and the sound of the water rushing through the paddle wheeler. 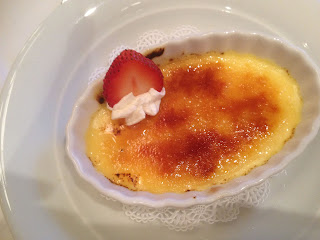 My other food highlight was the creme brulee. Oh my! This was truly the best creme brulee I've ever eaten. The texture was creamy. The glazed sugar on the top was perfect. Not too crisp. Not too crunchy, but just right. It was also adorned with a slice of strawberry. I savored every bite of this baby, and I ate it exceptionally slow because I wanted it to last. When I took my last bite, the most amazing thing happened. Another creme brulee appeared in front of me and...well...I had to eat that one, too.


For me, my voyage on the American Queen was more than a cruise. It was truly an all- American adventure (Literally!). I had the opportunity to cruise on a steamboat paddle wheeler with amazing people. In speaking about the river, Jerry Hay says, it is, "a place of rest, a place of power, a place of kindred spirits, a place of adventure." Tomorrow, I disembark the American Queen, but this experience will always be with me.


For additional information on cruising the American Queen, contact Janelle at janelle@lifesrudder.com.
www.lifesrudder.me
Posted by Douglas at 7:54 AM